You must read the fine print

If a company clearly states on their packaging or in their site’s legal section that a product is only a novelty or not for internal use, despite the object being entirely sold and marketed as an insertable, then you should entirely heed that warning. As late as the 1990’s, a warning like that was necessary because of the conservative climate at the time, but the culture has since evolved and a warning label should be seen exactly for what it is.  The adult toy industry is entirely self-regulated, so no matter what claims are made about what is contained in the material, if in the end they warn you not to put it in contact with your rectal lining, then it’s likely they know it’s not 100% safe. The difference in price with these questionable items is usually not substantial enough to justify the risk to you.

Here’s the very fine print of a recently introduced line of bargain priced “silicone” toys released in 2017, enlarged for readability.  The package is actually for an insertable plug and you’ll note they plainly say it’s not for internal use. So it’s buyer beware. Get your good toys from companies you know and trust, and if it doesn’t say “100% Platinum Grade” then it simply isn’t, no ifs ands or buts.

1 Platinum is required in the process that cures platinum grade silicones, and there just is no such thing as “cheap platinum” on the world market.  I mean, if you found a gold ring that was labeled “gold” but just too cheap to be believed would you buy it thinking you were getting a great deal? No. You get what you pay for when it comes to gold, and the same goes for platinum.  If a toy is too cheap to be believed then it’s simply not made from a pure platinum grade silicone material. 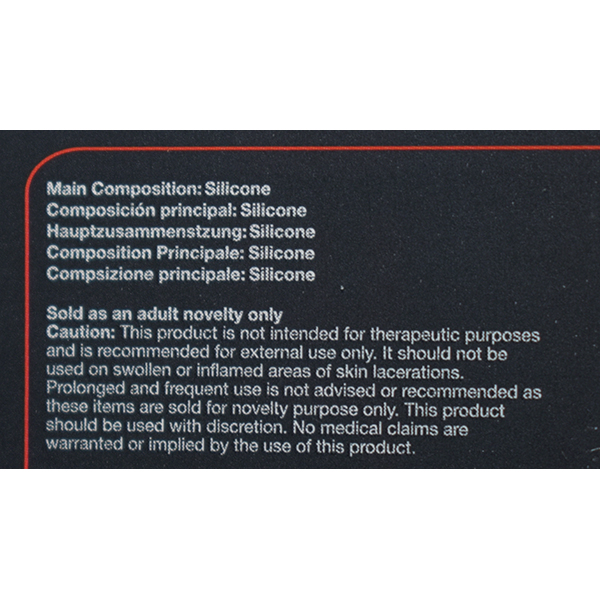