I and other manufacturers have always touted the non-porous quality of silicone, which is a large part of why it is such a great material for making toys. So having odors seemingly embedded in the material was baffling.

So I decided to do some research on the subject, initially thinking it would be quickly resolved, but I was wrong. After a few months of trying nothing short of 50 different iterations of cleaners and processes, I finally discovered the hurdle and the answer to getting odor off your plug.

Well the R&D on this was interesting to say the least, and the state of my bathroom for those 2 months was like a mad scientist’s lab with Egg plugs strewn about in varying states of… well, you get the picture!  But who better to do this I thought, so I hope my dedication to this doesn’t go unnoticed!  I’ll spare you all the details of how I got to my conclusions and get right to it.

How to Get that Odor Out

It’s known the softer silicones have a less dense molecular structure and as a result naturally exude a small amount of pure silicone oil. In fact, virtually all silicones used in the industry have this oil as part of the way to make them softer.  This oil is inert and is the same family of oils found in silicone lubes. As silicone doesn’t wash off with soap and water it remains on the toy’s surface and with it holds any odors it might have come into contact with. This is why all the traditional cleaning methods like boiling and bleaching weren’t working.

You can indeed clean your toys with a little care by rubbing the surface with something soft and some pure acetone, which is what good nail polish remover is.  Acetone is a solvent for silicone oil. This often worked on its own, but for really persistent odors, following this up with a soak in an enzymatic cleaner like those for pet stains and odors worked wonders.

To get the enzymes on the entire surface without having to use a lot, put your plug in a ziplock bag with some of the solution, it might only take several sprays, remove the air from the bag and seal. Allow to sit a few hours.

I didn’t find any odor removers based on bacterial action that were effective, so be sure it’s an enzyme based product.

Acetone is safe on the silicone if used in the manner described.  Only use the acetone to remove the surface oils that are trapping the odor and then wash with soap and water.  Testing was performed on my Firmer Black and SuperSoft silicone formulas as well as the Soft silicone on my large Apollo from Bad Dragon. Over a period of one month, all 3 materials were cleaned 100 times in a manner consistent with the indications above: a soft cloth moistened with pure acetone was rubbed on the surface with firm pressure and then washed.  You will note from the images that there was a slight dulling of all surfaces, but no pitting or erosion of the material took place.  I surmise the loss of sheen to simply be from the friction of the cloth itself, and not an action of the acetone. 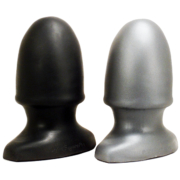 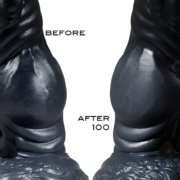 Can I fix my toy if it has a crack or tear?How do I clean and sterilize SquarePegToys®?
Scroll to top